The sustained release coating market has been estimated to grow at a noteworthy speed throughout the forecast period. The growth prospects in the global market are attributed to the development of the mini-tablets at an increased rate around the world. This development has achieved noteworthy attention because of various advantages that include less coating material required and ease of manufacturing. In addition to this, less intra- and inter-subject variability and less risk of dose dumping are some other vital advantages of these mini-tablets that are likely to fuel the growth avenues in the global market in the foreseeable years.

Excipient technologies, modified-release tablet formulation, versatile sustained release, and solvent-free production are some other noteworthy advancements that are taking place in the global market. 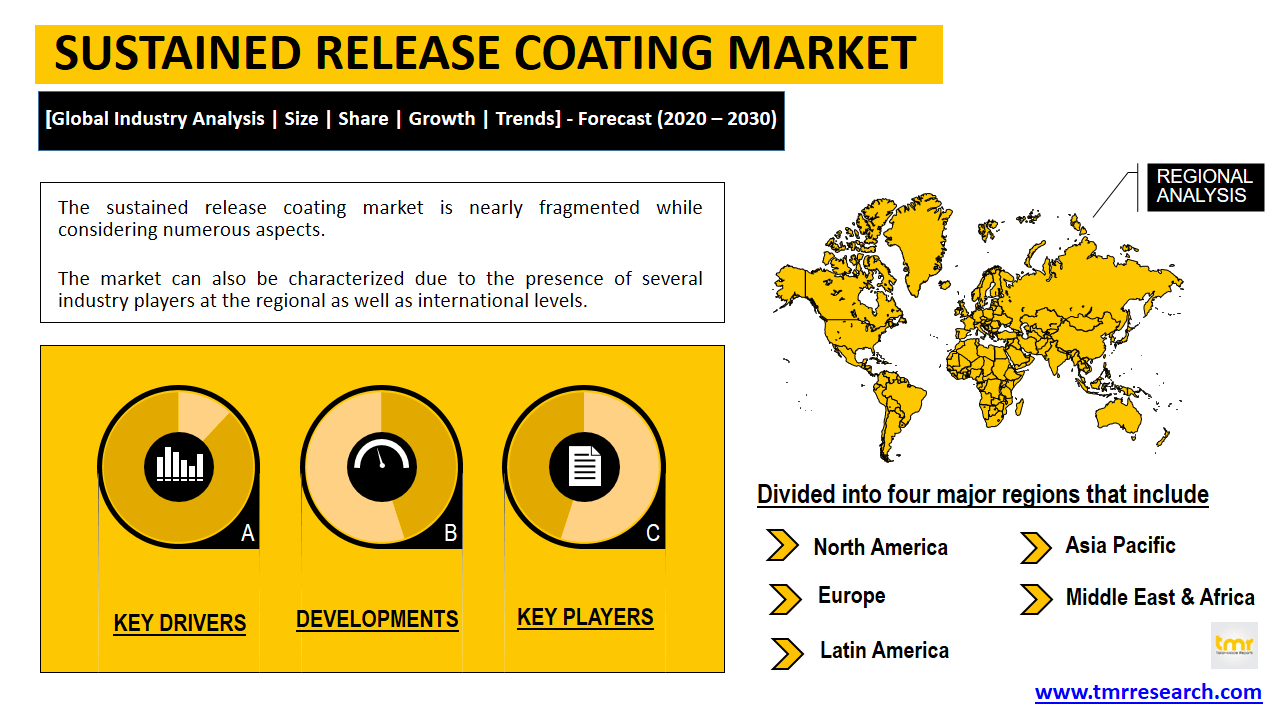 The development of novel technologies, for instance, sustained-release coating along with rising demand for microencapsulated products are likely to fuel growth avenues in the global market.

The sustained release coating market is nearly fragmented while considering numerous aspects. The market can also be characterized due to the presence of several industry players at the regional as well as international levels. Furthermore, these players are concentrating on certain strategies in order to achieve their desired subjects. Penetration in the global market and increasing consumer awareness of the brand are also some noteworthy points that are considered by these market players. The other significant trends in the global market include increased R & D activities to enhance existing technologies, mergers or tie-up, product portfolio expansion, and novel product launches. Along with these initiatives, the players from the market are putting efforts to enhance their services to make a wider reach to their consumers.

For instance, Colorcon Inc. has expanded its portfolio in April 2019 while adding a wide range of the novel products with modified release that come with Aquacoat technology of DuPont. The line of these products includes Aquacoat ECD that is basically a colloidal dispersion of ethylcelluloce polymer for the sustained release. Further, the coatings can also be used not only in nutritional solid dose applications but also in pharmaceutical industry.

Some of the key players in the sustained release coating market are:

The sustained release coating market has been divided into North America, Asia Pacific, the Middle East & Africa, Latin America, and Europe among regions. Out of these areas, North America has been predicted to hold the largest share in the global market with rising demand for pills, capsules, and microencapsulated tablets. In addition to this, the presence of a larger number of pharmaceutical players along with huge investments to develop novel drugs as well as drug delivery systems are also estimated to create stable growth avenues in the global market in the following years.

The reports at TMR Research provide qualitative solutions that break the barriers of doubt or uncertainties when the stakeholders plan to expand their growth reach. The researchers compile the necessary information that enlightens the CXOs about the current growth opportunities in a specific market and enables them to make the most of the opportunities.

TMR Research is a leader in developing well-researched reports. The expertise of the researchers at TMR Research makes the report stand out from others. TMR Research reports help the stakeholders and CXOs make impactful decisions through a unique blend of innovation and analytical thinking. The use of innovation and analytical thinking while structuring a report assures complete and ideal information of the current status of the market to the stakeholders.

TMR Research has rich experience in developing state-of-the-art reports for a wide array of markets and sectors. The brilliance of the experts at TMR Research and their alacrity to conduct thorough research and create phenomenal reports makes TMR Research better than others.

Along with studying the opportunities necessary for growth, threats are also an important aspect to look upon for the companies and stakeholders in a specific sector. TMR Research studies every negative aspect that will hinder the growth of a specific area of business and includes it in the report. The stakeholders and CXOs will have the benefit of assessing the threat and take the necessary steps to prevent the hindrance caused due to the threats.

Keeping up with the latest trends is crucial in any business or sector. While stakeholders are aware of the trends that are on the surface, TMR Researchers find trends that are deeply entrenched in the particular market or sector. The reports are constantly updated with the latest trends so that the stakeholders and CXOs can derive benefits from the trends and generate good revenues.

Demography forms an important part of the growth pattern of all the markets. Diving deep into the demographics enables maximum output from specific areas. The TMR Research team assesses every region and picks out the vital points that have a large impact on the growth of a market.

The analysts at TMR Research conduct an all-round analysis on the competitive landscape of the market. The observations recorded by the analysts are added to the reports so that every stakeholder gets a glimpse of the competitive scenario and frame their business plans according to the situation.

The COVID-19 outbreak has changed the growth projections of numerous sectors and businesses. The analysts at TMR Research have conducted a conscientious survey on the markets after the pandemic struck. The analysts have put forth their brilliant and well-researched opinions in the report. The opinions will help the stakeholders to plan their strategy accordingly.

Reports by TMR Research are available at a discounted rate for:

For additional information on our pricing strategies, feel free to get in touch with our team